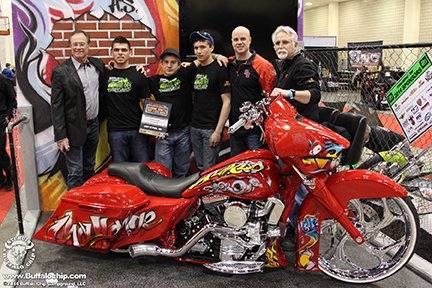 The Sturgis Buffalo Chip® proudly announces that the custom 2014 Harley-Davidson® Street Glide built by participants of the Chip’s Student Build Challenge  received first place in the High School Build Open Class at the 27th annual Donnie Smith Bike Show  this past Sunday, March 30. The Sturgis Brown High School students participating in the build had been working steadily since Jan. 6 under the instruction of the industry’s top professionals in order to complete customizations in time for this past weekend’s unveiling. The finished bike features a fully overhauled and customized motor for increased performance, a lowered stretched body and an eye-catching graffiti-themed paint job. It is also one of the first custom 2014 Street Glides in existence.

“The motorcycle these students created has absolutely blown away my expectations for this year’s bike build project,” says Rod Woodruff, President of the Sturgis Buffalo Chip. “Moreover, these young students created a machine that wowed the industry’s top builders at the Donnie Smith Show. That’s something the students, the school, the community and all those involved in the Student Build Challenge should be very, very proud of.”

2014 marked the first year the Student Build worked on a new-year motorcycle sponsored by Black Hills Harley-Davidson, and the students found customizing a brand new Street Glide to be one of their largest hurdles. The Motor Company had made drastic changes between the 2013 and 2014 models, which meant most of the custom parts for the bike had yet to be created.

This was also the first year the bike build program placed the same focus on the motorcycle’s performance as it did its appearance. The bike features a Trask turbo system with a 10:1 compression ratio, Dave Mackie Engineering hemi Harley heads, CP Carrillo dome pistons and performance parts from Feuling Parts. The class anticipates that together these parts will work to produce 175 horsepower once the motorcycle has enough miles on it to safely run a dyno test.

“If somebody’s a motorhead, they’re going to get really excited about the performance of this motorcycle,” says Student Build Challenge mentor, Keith Terry of Terry Components. “Those who care more about how the bike looks will love it too. We’ve got both elements going for our bike this year.”

Custom stretched body parts allowed the students to create a longer, lower-sitting motorcycle. They replaced the 19-inch front wheel with a 26-inch from R.C. Components and swapped the standard black seat for a buff leather seat made by Howard Knight. Finally, the students took the bike to Ian Strachan Designs to give it a striking Ferrari-red graffiti paint job.

“It was hard for some of the students to comprehend just how amazing the end product was going to be,” says Sturgis Brown High School instructor, Chad Hedderman. “But once everything came together and the students stood next to their bike at this renowned bike show, it finally hit them that they were part of something really big.”

The next stop for the award-winning Student Build Challenge bike is the Black Hills Motorcycle Show in Rapid City, SD, April 12-13. The bike will later appear in Easyriders Magazine, where it will receive its own photo spread and feature-length article. On Aug. 4, the bike will be auctioned off during the Sturgis Rally in support of the Buffalo Chip’s 7th annual Legends Ride®  charity event.

Students worked closely with industry veterans, Keith Terry of Terry Components and Randy and Nick Cramer of Dakota V-Twin, along with high school instructors, Chad Hedderman and Bill Johnson, to learn the state-of-the-art techniques needed to customize their 2014 Street Glide. The bike build project taught students important values and life lessons while vastly increasing their technical knowledge. The skills learned will give these students an overall advantage should any decide to pursue a career in motorcycle fabrication or customization.