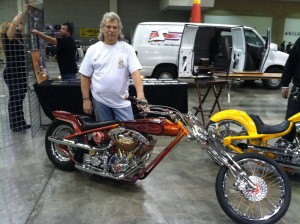 The Editor — This Digger by Donnie Smith was built back in the digger heyday and it looks as good now as it did then.

The Digger became another popular style. Similar to the Frisco choppers, Diggers were frequently even longer than earlier bikes, but still low. The coffin and prism shaped tanks on these bikes were frequently mated wiigm th very long front ends (12″ over stock and more), with the archaic girder fork often being used to accomplish this instead of the more common springer or telescopic types. Body work was also moulded to flow seamlessly, using copious amounts of bondo. New paint colors and patterns included paisleys, day-glo and fluorescent, along with continuing use of metal-flakes and pearls.

Shovelheads – Harley’s then-current big-twin motor, the Shovelhead was extremely popular with chopper builders in this era, and use of the older motors, particularly the Knucklehead and Flathead declined as parts became harder to get and the performance of the new motors proved superior.

The 30th Annual Dennis Kirk Donnie Smith Bike Show & Car Show Parts Extravaganza Biking enthusiasts from all over the country will be flocking to the 2017 Donnie Smith Bike & Car Show, the largest custom bike show in the Midwest. Tickets are on sale at the RiverCentre Box Office, all Ticketmaster locations, charge by phone at 800-745-3000 or online www.ticketmaster.com DATES – March 25-26 – Saturday – 9 a.m. – 7 p.m. & Sunday – 10 a.m. – 5 p.m.

Manufacturers In The House
Ok we got the manufacturers here to answer your questions and get you the stuff you need. They want to talk with you so come in and meet them.